Since May 2015, Geo S.T. OÜ has been involved in the production of oil rig components. The title of the project is MOHO-NORD and the end client for the work is the fuel producer TOTAL of France. This is Geo S.T.’s first so-called OFFSHORE project. The oil rig will be erected in the seas off the coast of the Democratic Republic of the Congo in Africa. The content of the work is 3-D control during the entire production and installation process. The works are being carried out at Mäntyluoto, Republic of Finland, in a metal element production factory belonging to Technip Finland

As the deadline of the project is short and the nature of the work complicated, geodesists work in two shifts.

By today already 3 Geo S.T. geodesists are involved in the project. 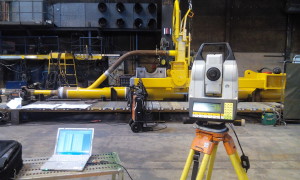 This project should be completed within this year. At the same time two new projects have started in parallel with the ongoing project and the work should also continue next year.